You’re standing in a lush forest of diverse plant life and trees, beneath your feet is a vast information network allowing those trees and plants to communicate and even exchange chemicals. Believe it or not, they even sense that you are there… This network is made up of fibrous fungi, known as mycelia, or mycelium, The mushrooms you also see growing are the fruiting part of this vast network. Surprisingly, fungi have only as much in common with plants as we do! Evidence is pointing to the fact though, that there is a symbiotic relationship going on between living things.

Below is an excellent article from BBC’s Earth series, explaining this phenomena in more detail. This demonstrates the “wired internet” between plants, but what about the “wireless internet” among plants and all organic life?

The author is perhaps not aware of an even more expanded view, validated by experiments and researchers such as Cleve Backster. Backster was an interrogation specialist for the Central Intelligence Agency, who later went on to use “lie detection” devices on plants. He found that plants actually sense hostility, or positive intentions, and plants communicate with each other through some sort of invisible field of consciousness. This has become known in scientific circles as the “Backster Effect“, and explained in his book, Primary Perception: Biocommunication with Plants, Living Foods, and Human Cells.

Cool, but how does this affect your life?

As the article suggests, the plants, trees, and organisms we see are not separate individuals, but an integrated community. Gregg Braden, best selling author and speaker, goes into great depth and detail showing us the evidence that we need to update our antiquated ideas about life proposed so long ago by Newton and Darwin.

Life is not simply mechanistic and based upon competition, but instead on mutual aid. Integration and co-operation are the norm; competition is actually the exception, not the rule.

Dr. Bruce Lipton has spent most of his scientific career stepping over the perpetuated dogma, and providing us a new understanding that we are in fact not separate individuals, but an integrated whole. Our bodies are made up of a community of cells that become a bigger “cell” in the community of the larger humanity, that makes up an integrated part of all Life and Existence.

Plants Communicate With Each Other Using an Internet of Fungus

Hidden under your feet is an information superhighway that allows plants to communicate and help each other out. It’s made of fungi.

It’s an information superhighway that speeds up interactions between a large, diverse population of individuals. It allows individuals who may be widely separated to communicate and help each other out. But it also allows them to commit new forms of crime.

No, we’re not talking about the internet, we’re talking about fungi. While mushrooms might be the most familiar part of a fungus, most of their bodies are made up of a mass of thin threads, known as a mycelium. We now know that these threads act as a kind of underground internet, linking the roots of different plants. That tree in your garden is probably hooked up to a bush several metres away, thanks to mycelia.

The more we learn about these underground networks, the more our ideas about plants have to change. They aren’t just sitting there quietly growing. By linking to the fungal network they can help out their neighbours by sharing nutrients and information – or sabotage unwelcome plants by spreading toxic chemicals through the network. This “wood wide web”, it turns out, even has its own version of cybercrime. 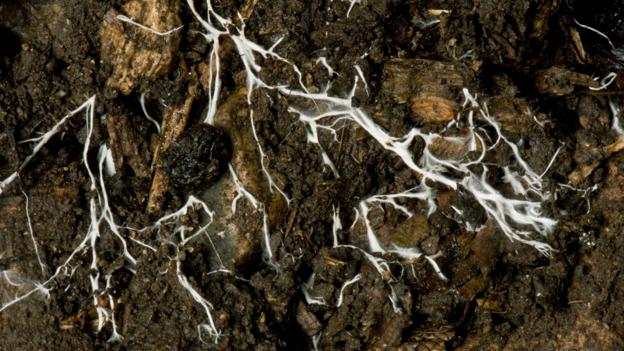 The mycelium of a fungus spreading through soil (Credit: Nigel Cattlin / Alamy)

Around 90% of land plants are in mutually-beneficial relationships with fungi. The 19th-century German biologist Albert Bernard Frank coined the word “mycorrhiza” to describe these partnerships, in which the fungus colonises the roots of the plant.

In mycorrhizal associations, plants provide fungi with food in the form of carbohydrates. In exchange, the fungi help the plants suck up water, and provide nutrients like phosphorus and nitrogen, via their mycelia. Since the 1960s, it has been clear that mycorrhizae help individual plants to grow.

Fungal networks also boost their host plants’ immune systems. That’s because, when a fungus colonises the roots of a plant, it triggers the production of defense-related chemicals. These make later immune system responses quicker and more efficient, a phenomenon called “priming”. Simply plugging in to mycelial networks makes plants more resistant to disease.

But that’s not all. We now know that mycorrhizae also connect plants that may be widely separated. Fungus expert Paul Stamets called them “Earth’s natural internet” in a 2008 TED talk. He first had the idea in the 1970s when he was studying fungi using an electron microscope. Stamets noticed similarities between mycelia and ARPANET, the US Department of Defense’s early version of the internet.

Film fans might be reminded of James Cameron’s 2009 blockbuster Avatar. On the forest moon where the movie takes place, all the organisms are connected. They can communicate and collectively manage resources, thanks to “some kind of electrochemical communication between the roots of trees“. Back in the real world, it seems there is some truth to this. 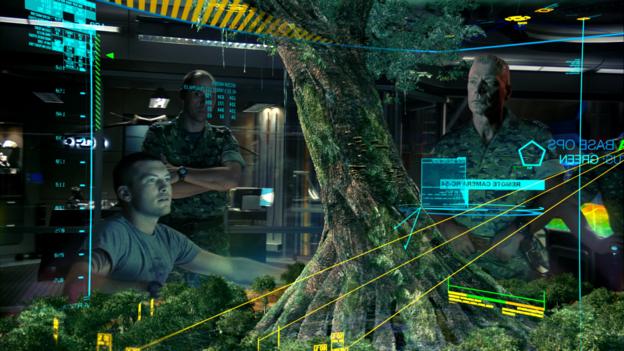 It has taken decades to piece together what the fungal internet can do. Back in 1997, Suzanne Simard of the University of British Columbia in Vancouver found one of the first pieces of evidence. She showed that Douglas fir and paper birch trees can transfer carbon between them via mycelia. Others have since shown that plants can exchange nitrogen and phosphorus as well, by the same route.

These plants are not really individuals

Simard now believes large trees help out small, younger ones using the fungal internet. Without this help, she thinks many seedlings wouldn’t survive. In the 1997 study, seedlings in the shade – which are likely to be short of food – got more carbon from donor trees.

“These plants are not really individuals in the sense that Darwin thought they were individuals competing for survival of the fittest,” says Simard in the 2011 documentary Do Trees Communicate? “In fact they are interacting with each other, trying to help each other survive.” –  Read more at BBC.com

Do you believe plants communicate? How might this belief change the way you view life?

I’d love to hear your comments below…